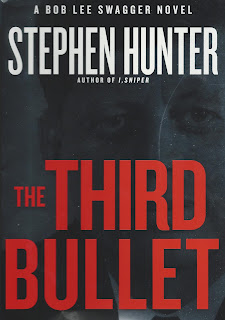 This Nov. 22 will mark the 50th anniversary of the assassination of President John F. Kennedy. One of America's darkest days will be remembered and still persistent conspiracy theories will be resurrected.

But in case you have not heard, there is finally closure on that conspiracy question. The answer is, yes, there was a second gunman and a third shot. At least that's what Stephen Hunter says really happened, according to his latest Bob Lee Swagger novel, "The Third Bullet." (2013, Simon & Schuster, $26.99 hardcover).

Swagger is Hunter's heroic and laconic former Marine sniper who becomes quite the snooper after being asked to investigate a journalist's murder, which leads him to probe one of America's ultimate murders.

Hunter, a former Washington Post film critic, is the author of 18 novels, most of them starring Bob Lee Swagger and before that, Earl Swagger, Bob Lee's father.

In "The Third Bullet," Hunter crafts a convincingly complex conspiracy involving, at various levels, the usual suspects- the CIA and the Soviets. Lee Harvey Oswald is the triggerman, but is not the only (or most  accurate) triggerman.

Read more »
Posted by Patrick Harwood at 3:20 PM No comments: